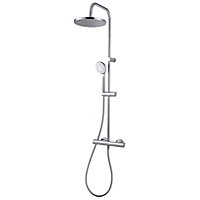 Create a sleek and elegant finish to your bathroom with the Cavally shower set.

Make your bathroom the ultimate space to relax with this Cavally thermostatic shower mixer set. The curved design of the overhead and handset shower is a great choice for a contemporary style bathroom. Easily switch between the two shower heads with the integrated diverter for the perfect shower.

I bought this shower last month and easily fitted it myself.
It has been much better than the five year old shower it replaced and it slotted in the place with no problems.
The levers to operate this shower are very user friendly. Its easy to adjust the temperature and which shower head to shower under.
The chrome so far is spotless, no marks or pits.
At first we thought the water hose, which is plastic, was not brilliant, doesn't look as nice as the wound, chrome one we were replacing. But it's proved nice and simple, looks fine and is much easier to keep clean.